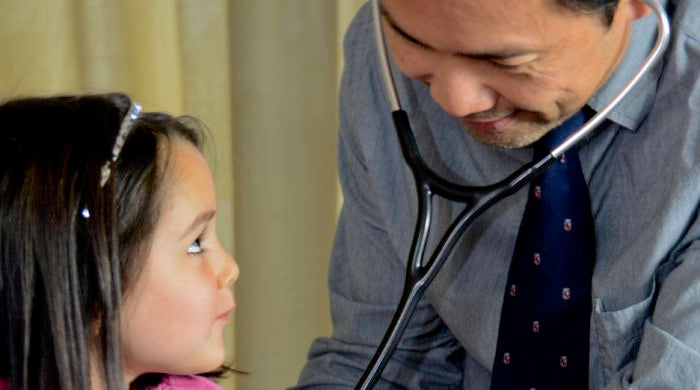 Dr. Yuen joined Western Washington Medical Group in 2009, but he’s been known in the community since 1990.

What brought you to family medicine?

Dr. Yuen: Oh boy that’s a complicated question. I was actually in computer science before, I don’t know if you know much about my background, that was my first career and then what happened was I got in a fairly bad car accident and I had the first-hand taste of the medical system and you know, the people that were involved in my care and you know, I was very impressed and I thought that was a very noble profession to be in and I was always interested in biology and the life sciences so I figured you know, I was about 2-3 years into computer science at that point working in the industry and I decided to quit and go back to school and here I am.

How long have you been in the medical field then?

I’ve been since, let’s see, I started practice in ’93, that’s when I finished my residency training and graduated in ‘90 from medical school.

So following up on that, I understand you play piano, have a degree in computer science and like to dirt bike. You sort of answered the ‘why medicine’ question, but why family medicine in particular?

Actually, it was more of a realization during my clinical years. We had to rotate through all the specialities and I didn’t really like the one-sided nature of being in a specialty and not really getting to know the people that I treat, and family medicine was the one that really interested me the most, I actually thought that I wanted to go into Orthopedic Sports Medicine at one time but rotating through that specialty I thought nope that’s not for me.

Great. What type of medical problems do you see in your practice?

Everything under the sun essentially – any conditions that go from little infants to people who are over 100. My oldest was 107 and she just passed away this past year. I think I started seeing her when she was 80, whenever my first practice she came to see me.

Do you work with a lot of families from childhood into adulthood?

Yes, I have a handful of those, yes. My practice is probably more geared to, I would say the demographics are more adult folks average age in the 40s, 50s, 60s around there.

What are the hardest challenges right now in family medicine?

Oh boy, I can be very negative about this or positive about it but I would say it’s challenging to try and help patients navigate through, you know it’s not really medical issues but navigating through the insurance changes and the requirements, criteria you know, what they want patients to do, and also the fact that a lot of insurances are now high deductible so the financial ramifications are huge for those types of people that find it difficult to come in because of that.

Are you seeing that the shifting world of medical insurance of what’s being accepted and what’s not has impacted your patients?

And you know sometimes it takes a better part of the appointment time. It’s a shame because you’re not really addressing the health issues or social issue just regulatory things and what their insurance imposes on them.

Well, I like to know about their lives and invariably learn things from each other and their experiences. I’ve learned several things from patients and some things that are new to me and I appreciate that and the feeling that they are not just a number and being herded in and out of the clinic that is the most rewarding part of treating patients long term.

Have you been in the community for a while and how does it help practice?

As I’ve said I’ve been here practicing since the end of 93 and I’ve practiced with one other group before this group. I left that group in ‘09 and joined this group since then.

Over the years what has kept you interested in family medicine?

I would say the interesting patients. You know I enjoy talking to them, I look forward to certain names that come up on my schedule.

What would your advice be to a new family medicine physician?

Don’t lose sight of why you got into it – as I said, the whole insurance mess can be discouraging sometimes – I don’t know what their training is like these days but I’m sure the insurance thing is probably covered to a much greater detail now than when I trained when insurance wasn’t really an issue we discussed. Keep a positive attitude and try to work with the system instead of against it – that will try to keep your sanity that way.

Isthere anything else you’d like to add for any future patients or current patients?

I think my background is fairly well rounded in terms of interest and such, as you know my dirt biking, piano, is all very different so I think that’s the reason why I like family medicine, it’s so varied, you don’t get the same type of patient or medical condition all the time, I think that would kind of be rather uninspiring for me.

Do you still get a chance to play the piano and dirt bike and work in computer sciences?

Yeah I actually you know, more in the electronics area, I build electronic clocks using old vintage bulbs they’re called nixie tubes, they glow amber with the digits inside of them, I build clocks using defunct tubes. I am involved with what we call a ‘salon concert’. Almost every year my friend who is a piano teacher, he puts on a concert for his musical friends and we practice for that event once a year or so, so I’m still involved in the musical part of things.

The computer science was actually from my older brother who was interested in electronics and such, he got me interested. As a child, I actually started soldering things and making things up and computer science was in its infancy at that time when I went to undergrad and I thought that would be a good thing to get into because its new and kind of related to electronics so that’s how I got into that. The piano thing I’ve played all my life since I was 7 or so and I enjoyed it. In fact my parents did not think I’d keep up with it but I kept bugging them that I wanted to learn an instrument because my friends knew how to play and I was impressed and they were skeptical I’d keep up with it and they were like ‘okay, if you keep up this much for this period of time we’ll go ahead and rent a piano for the house so you can practice, and if you keep it up for this much longer we’ll actually buy a piano’ and they did.

That’s a good deal. Did you find that the discipline you had in playing piano transferred over in med school and residency?

Yeah, I guess in a way you have to persevere – that would be what I would take from that field, practicing is definitely what you need to get some level of competence.

If you weren’t in family medicine which department would you prefer to be in?

Oh boy, that’s a very tough question. I guess the most similar would be internal medicine is what I would do but I would give up the younger folks.

Do you prefer working with younger folks?

I’m sure all the treatments that come in and problems everyone comes in with varies drastically depending on your age.

Right, and it’s always interesting because you never know what the day will turn out to be you know some days you do a little minor surgery, other days you’re more in a supportive counseling type of thing and some people just come in and need some reassurance, especially the older folks who have more concern about their health or they live alone, that sort of thing.

What is your favorite part of the Everett WWMG community?

The medical group itself?

Yeah, being a part of the group.

I like the fact that we are all kind of independent to some degree, we practice what we feel would be most appropriate for our style and our clinic, and not having a corporation tell you what we want you to do and so I think we thrive in this kind of environment. And that’s part of the reason why I left the last group I was with. So, I think the independence and the collegiality between the specialists and us kind of helps too.

It sounds like it’s a great community and group of people to be working with.