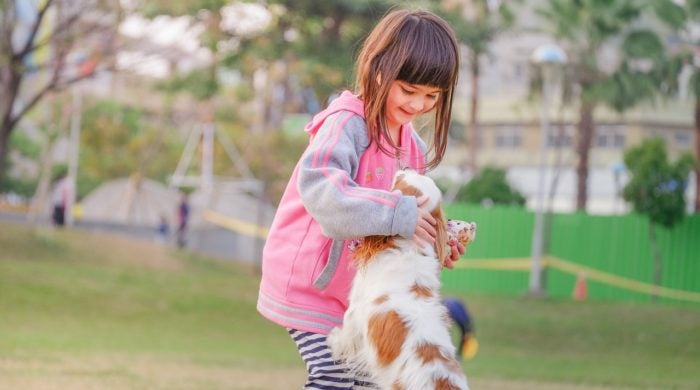 This is a guest post. All views contained herein are those of the author and do not necessarily represent the views of Western Washington Medical Group.

Kids love pets. Anyone who has been to a zoo can confirm that kids enjoy interacting with, touching and even hugging animals.  Children are naturally drawn to animals, learning their sounds, smells, and personalities, and developing an understanding of the animal world and their unusual habits.

But does bringing a pet into the  home actually have a positive effect on our children’s early childhood development?

Households today include ferrets, cats, puppies and tropical lizards, along  with exotic birds and rodents. This new wave of feathered and four-legged family members caught the attention of the research world. Scientists are beginning to explore the effects of animal influence on people, particularly children.

James Serpell, director of the Center for the Interaction of Animals and Society at the University of Pennsylvania thinks pets have a direct impact on the development of children. “Growing up with a pet gives children a much more inclusive sense of self,” Serpell says, “I think it has implications for the relationship of people to others.” Serpell’s work also suggests that the ability of a child to bond with an animal assists them in the ability to bond well with other humans, especially those with whom differences are shared.

Another researcher, Dr. Johnson of the Research Center for Human-Animal Interaction, concurs with Serpell in that children seem to realize a wider and stronger self-awareness following interaction with animals. As an example, Johnson states that activities such as dog walking are a powerfully motivating form of exercise for children struggling with obesity. It is possible that the resultant weight loss from the exercise promotes the child’s ability to believe in their own capacity for conquering fears and inhibitions. They also benefit from their dog’s unconditional acceptance of them, something obese children often feel is lacking in their social world.

It certainly seems that parents agree on the positivity of animal-child relationships. When surveyed, most parents stated that their children became more responsible, more sociable and developed more character after bringing a pet into the home. There is a growing number of researchers delving into the area of autism therapy that includes the use of animals. This interest is likely stemming from reports by parents that their autistic child seemed to show social improvements following the inclusion of a pet to the family circle.

While research is still fresh and there is far more to be learned on the topic, so far the general consensus of the animal loving populace is that children do benefit from the empathetic social interaction of pets.

Naturally, many parents may have concerns, such as possible infections, biting and possible allergies. The majority of these worries are reduced or even removed by thorough research before going to the pet store. For example, if you have a toddler, some dogs, such as Dalmatians or Cocker Spaniels, will not be the best fit. These animals tend to be high strung, and have little patience with ear pulling and poking. Young families are best suited for easy going dogs that have been well-trained.

Animals that are well looked after, well groomed and regularly taken to the vet rarely present any concerns with infection. Keeping cages or litter boxes clean and out of reach of children is very important in protecting children from possible pathogens.

Parents can explore possible allergies by exposing their children to pet dander and watching for signs of reaction. For those that show no allergies initially, but develop them later on, there are many adoption programs that provide safe new homes for the pet. It has been suggested that children raised in a home with pets may be less likely to develop pet allergies later in life.

All in all, if proper precautions and research are done, families agree that adding a four-legged friend is well worth the risk that will prove to be a joy and delight for the entire family.