What We Know About Monkeypox 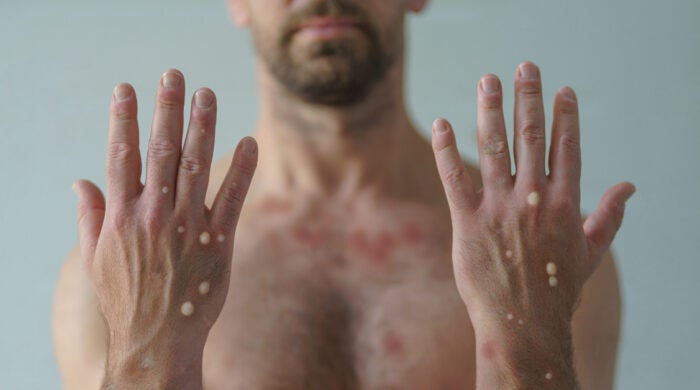 Until this summer, most Americans had never heard of monkeypox. By late August 2022, nearly 20,000 cases had been diagnosed in the U.S., with close to 50,000 worldwide. Monkeypox seems poised to launch a new pandemic. Just how worried should you be?

Monkeypox was first identified in 1958 in colonies of monkeys kept for research, but the source of disease remains unknown. Monkeypox is caused by a virus that belongs to the same group (Orthopoxvirus) as smallpox. Unlike smallpox, monkeypox is rarely fatal. The severity of the disease is often closer to that of chickenpox, although it is unrelated to chickenpox. “Pox” describes any disease that produces pimple-like rashes.

Monkeypox was first recorded in a human in 1970, but until very recently, it was reported in central and west African countries. Beginning in May of this year, monkeypox outbreaks began in the U.S. and other countries. On August 4, 2022, the U.S. federal government declared monkeypox a public health emergency.

Unlike COVID, which is transmitted through respiratory droplets, monkeypox spreads through close, personal contact with the scabs or fluid contained in the lesions that form on the skin of an infected person. Most commonly, this occurs during skin-to-skin contact, but can result from shared clothes and bedding.

So far, sexual and gender minorities have been disproportionately affected by the epidemic. However, the epidemic is not restricted to any particular group. Anyone who has been in any kind of physical contact with an infected person is at risk for infection.

A person who is infected with monkeypox can take between 3 – 17 days to develop symptoms. Most infected people will develop a rash, followed by flu-like symptoms. Symptoms can include:

Patients are contagious from the first appearance of a rash until the last scab heals. The illness usually lasts two to four weeks. Although the rash can be very painful, most monkeypox cases can be managed at home. Anyone who is immune-compromised, pregnant, or elderly, and children under the age of eight may be at higher risk for severe illness.

So far, no vaccine has been developed specifically for monkeypox. However, because the two diseases are related, smallpox vaccines may prove effective in preventing monkeypox infections. These vaccines are currently being tested in humans for safety and their effectiveness against monkeypox. But it is suspected that they may have contributed to widespread immunity that prevented monkeypox from spreading in the past. Smallpox vaccinations stopped being mandatory decades ago (the disease was eliminated in 1977), possibly leaving unvaccinated younger generations more susceptible to monkeypox infection.

There are two types of smallpox vaccine. ACAM2000 is introduced through a scratch in the skin. It forms a “pock” at the inoculation site and can leave a scar. As of this writing, it is not yet publicly available in the United States.

JYNNEOS is a vaccine administered by injection as a two-dose series, and as such is the primary vaccine being used in the United States during this outbreak. Supplies of JYNNEOS are extremely limited and for now it is only available to individuals who have been exposed to monkeypox or are at high risk for exposure, such as healthcare workers who treat monkeypox. If you think you might be eligible, you can contact your primary care provider for help obtaining a vaccination.

The best method of prevention is to avoid close contact with anyone who has a rash. If you travel, avoid contact with rodents and primates.

If you think you’ve been exposed to monkeypox or develop an unfamiliar rash, do not ignore it. Contact your primary care provider. Let them know up front that you are concerned about monkeypox, because many doctor’s offices and clinics have established protocols for dealing with monkeypox. Avoid close contact with others until you can be tested or diagnosed.

If you are infected with monkeypox, follow your primary care provider’s instructions. Isolate at home and avoid close contact with others, including pets, until your skin is completely healed from the rash. In most cases, the illness can be managed at home with over-the-counter medicines for pain. For vulnerable populations and in more severe cases, the antiviral medication tecovirimat (TPOXX) may be helpful.

Although few doctors in the U.S. have ever seen a patient with monkeypox, recognition of the disease, access to testing and vaccines are improving, as is the quality of available information. As with any outbreak, the circumstances around monkeypox are rapidly evolving. The CDC maintains a web page with information on monkeypox, but you can contact your primary care provider for help with your specific questions.

For more information and updates on the current status of monkeypox in the U.S., visit the CDC website.