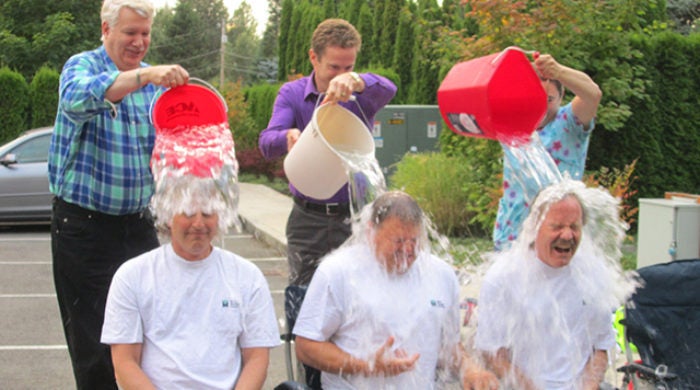 It all started on June 30, 2014 when talking heads on Morning Drive, a program on the Golf Channel performed an on-air Bucket Challenge. Then Matt Lauer did it on NBC’s the Today Showand soon after that, the Bucket Challenge went viral. Just about everyone has heard about the ALS Bucket Challenge but the rules state that you dump a bucket of ice water on your head and then donate $10 to the ALS Association while calling someone else out to do it next. If you’re called out to do the bucket challenge and refuse, you have to donate $100 to the ALS Association.

On September 8th, Jerry Tillinger, CEO (center), David Russian, MD (left) and Budge Smith, MD (right), responded to the challenge given them by one of our family practice groups and proceeded to “take the challenge”.

Now that they’ve done their part, they’ve challenge all of the WWMG Executive Committee to take the challenge as well.